A little while ago our instagram account reached 1000 followers, and it made me think of that I’ve never really done a post where I/we introduce ourselves, on any of our social media. So I wrote a little post on instagram, and then went on to share a slightly revised version of it on our facebook. Now, having looked back through our posts here on the blog, I think a ‘better late than never’ introduction could be fitting to include here as well. 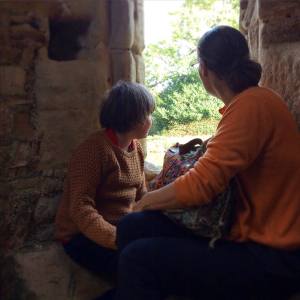 My very first post on here, over two years ago, was a kind of introduction too, but it was more about setting out the aims of my blogging (as they appeared to me at the time) than about who we are. So without further ado, this is us:

I’m Malin, and I’m the mother of Penguin. That’s a nick-name of his of course, not his actual name, we may be a little crazy but not quite THAT crazy. He’s just turned 12 (wow, how time flies!), I’m 42, and we live in East Sussex together with Penguin’s dad, my hubby, who I met almost a quarter century ago in a Hastings nightclub.

Penguin is home educated (homeschooled) since about two years back. He’s autistic, non-verbal and has developmental delays. He has an awesome visual memory, as well as a lot of sensory processing differences and learning differences. Living and learning with him is a fascinating journey, sometimes challenging and often exhausting, but oh so rewarding.

Soon after us starting to home ed, I started this blog, as a place to share some of the things we get up to (such as sensory activities, days out, baking together, crafts etc.), why we do what we do, and how we might do things a little differently to support our Penguin.

Before we started home edding, Penguin was attending school in Sweden, where he was born (as was I). Hubby’s English and we’ve always spoken a lot of English at home, watched English tv programmes, sports etc. When it became obvious that school wasn’t working out for Penguin (that’s a long story in itself…), we decided to move back to the UK. It was something we had considered/debated for years, and it finally felt like the right time. I’d been working with Penguin’s learning both in school and at home, and felt that home education could be a great fit for us, but it’s sadly not an option in Sweden. And Hubby was longing to get back to England, so there was no convincing needed there.

So, that’s a little bit about us and how we’ve got to where we are in life at the moment. To say a few more words about myself, I could add that I have a lifelong interest in music, photography and history. I have an MA in Art History, I went to art college in London for a year in the 90’s with plans of becoming a professional photographer, and I had an obsession with John Lennon in my tweens and early teens. I have pretty much no ability to remember names, while pictures and song lyrics tend to stick without effort. I’m a permanently exhausted pigeon with lacking executive functioning skills, and too much of a perfectionist for my own good (Please note that being a perfectionist does in no way correlate to being perfect! It just means that I keep trying to out-perform myself, which sometimes leads to great results, but also always to exhaustion…).

As you’ve probably realised by now, I’m also someone who struggles to stick to the point and keep myself short. So I’ll stop myself now, before I go off on another tangent. Thanks ever so much for reading my ramblings and for following us, I really appreciate you being here! x

28 thoughts on “This is us: A ‘better late than never’ introduction”