Pevensey is a village in East Sussex, near the coast, just a few miles north-east of Eastbourne. It’s main claim to fame in English history, is that it was the site for William the Conqueror’s landing in 1066. But Pevensey Castle’s history reaches much further back, to Roman times, and it was in military use as recently as during World War II. The castle makes for an exciting site to explore and learn about different periods of England’s history!

Nowadays, Pevensey Castle belongs to English Heritage and is open to the public. For details of opening times and prices, please check their website HERE. It’s currently open 10-17 every day, but during the colder months they will be closing and hour earlier. The medieval castle ruins sit within the walls of a Roman fort, and you can explore the outside of the castle as well as the Roman walls at any time and for free. It’s only when you cross the mote and enter the inner bailey that opening times and admission fees apply. That said, the most exiting parts are inside the castle walls, so it’s definitely worth getting in there.

This year, there have been improvements made to the visitor’s experience at Pevensey Castle, including a new exhibition space as well as new and improved signs with information and images regarding the castle’s history and function. We’ve visited the castle a couple of times before, and I can safely say that our latest visit (a few days ago) was the most rewarding one to date from a learning perspective, and this was largely thanks to the recent improvements. 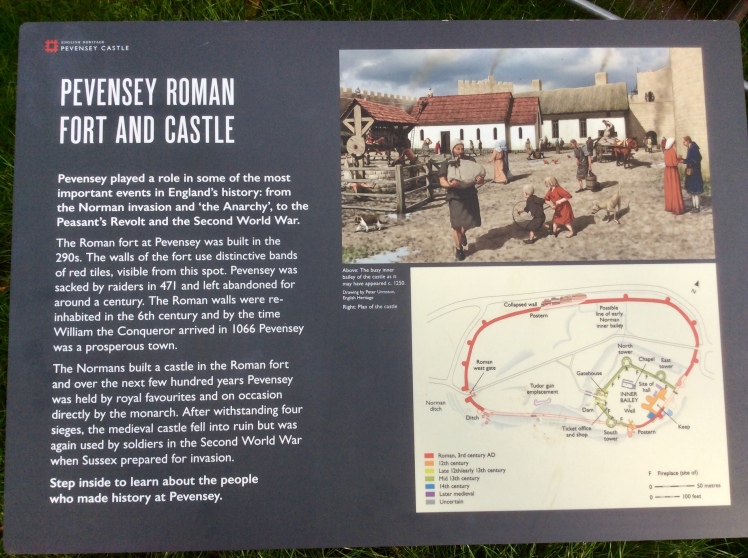 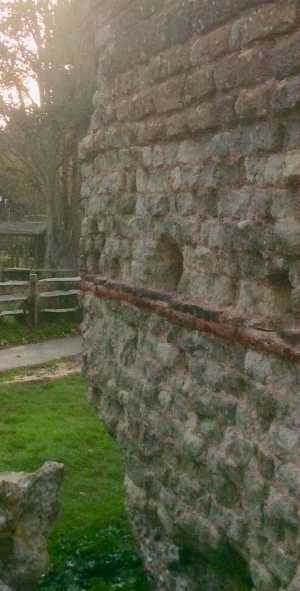 The sign pictured above is placed by the Roman west gate. On the map shown, you can see the walls of the Roman fort in red, while the medieval castle is mainly in green. As it says on the sign, the Roman fort was built in the 290s (so that’s over 1700 years ago! Mind-boggling, isn’t it?), while the majority of the medieval castle ruins stem from the 13th Century. That such a large part of the Roman walls still remains is quite amazing, isn’t it? And I really like the decorative bands of red tiles in them, as seen in my photo on the right here.

When William the Conqueror arrived at Pevensey, on 28 September 1066, he is believed to have immediately established a temporary castle (built mainly using timber and mud) within the partially ruined walls of the Roman fort, as a safe space for his men. A more permanent stone construction was eventually erected, as were other buildings inside the castle bailey.

On our visit the other day, we entered the castle bailey and showed our English Heritage membership card, then headed up into the North Tower. As usual, we let Penguin lead the way for the most part, as our whole experience is usually a more positive one when Penguin feels in control. When he feels that he’s NOT in control, he’s more likely to get stressed, anxious and upset (this is part of what being autistic is like for him), and that has the potential of spiraling into a very difficult and distressing situation. So to keep stress and anxiety low is a priority, and also important to aid his learning, as a stressed brain is unlikely to take any new knowledge on board.

Inside the North Tower, you can look out through the arrow slits (also known as ’loopholes’), and imagine what it would have been like to be an archer during a seige, back in the Middle Ages.

Outside the tower is a platform from which you have a great view down towards the sea, where you can see the village of Pevensey Bay sitting on the seafront. The platform also provides an excellent view of the inside of the castle bailey and its features, mainly the chapel foundations and the well, as seen below. The pyramid of boulders that’s also visible in this picture, is old ammunition for a trebuchet or catapult. Very tactile (you’re allowed to touch them) and quite fascinating as objects.

After descending from the North Tower, Penguin headed into the exhibition space. It’s made up of two rooms located above each other, linked by a steep wooden staircase, and includes displays of objects found during excavations of the castle and fort grounds, images and information telling us more about the history of this place, and a table with layers of pictures showing how the landscape has changed (a lot!) since Roman times. 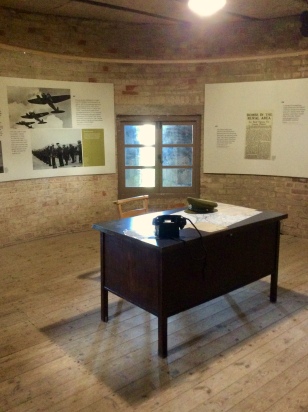 Continuing our way around the castle, the next room we entered had a display about how the castle was used during World War II. There was a desk with maps etc, and an old phone, which rang when we entered the room (there was supposed to be a message that would be played in the earpiece when anyone answeres the phone, but there was a note saying it was currently out of order). Penguin went straight to the phone to ‘answer’ it, which is quite funny as we’ve not had that kind of phone since way before he was born, and as he’s non-verbal he wouldn’t be able to speak on the phone either. I think he must have learnt how to ‘answer’ it from a toy phone. Do your children know how do answer an old-fashioned phone? And how about dialling from one..?

There was also a hat available to try on for a bit of roleplay or posing for photos. Penguin wasn’t too keen on it, but I never miss and opportunity to dress up if I can help it!

After leaving the war room, we went to have a closer look at the old well, and the big round boulders that were made to be launched using a catapult or trebuchet. It’s quite impressive to think that they managed to make, lift and transport boulders like that without anything resembling modern machinery. And it must have been terrifying to have one come flying through the air towards you!

As we were about to leave the castle, we discovered a sign telling us that there was a dungeon to check out, down a narrow spiral staircase. We’ve totally missed that on previous visits. At the bottom of the staircase was an extremely damp room, which must have been thoroughly miserable to be imprisoned in. 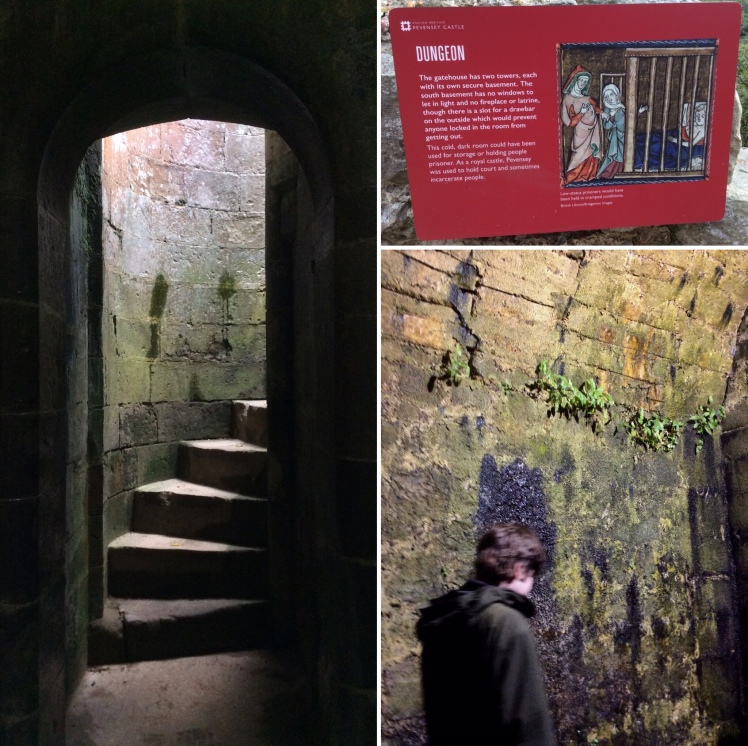 After seeing that dungeon, we felt extra happy to be free to leave the castle by our own choice, and we made our exit. We will no doubt be back again before too long.

If you too would like to explore Pevensey Castle, you can find directions and other info needed to plan your visit on the English Heritage website, HERE. There’s no café or restaurant at the site, but you’re welcome to bring your own picnic, or buy snacks and drinks from the little shop/ticket office. There are also pubs, cafés and restaurants available in Pevensey village, or you can do what we like to do, which is combine visiting Pevensey Castle with a trip to the beach in Pevensey Bay. It’s always nice, I think, to get a dose of ’vitamin sea’, and there are a couple of chip shops in the village in case you like having chips on the beach as much as we do.

Thank you for reading! Do you have any favourite historical places to visit in your region? Please share with us in the comments, where questions and feedback is of course also welcome, as always x

31 thoughts on “Days Out In The South East: Pevensey Castle”