Earlier this year I wrote a first ”Penguin Plays…” post (which you can read here) and I mentioned the that I intended to follow that up with more posts on various kinds of play. And here comes a second instalment – about playing with lego!

My main reason for wanting to do a series of posts on the subject of play, is that it’s something which can be complicated for children like Penguin (who’s autistic with developmental delays), and looking back, I think issues around play has been quite central to our experience of living with autism, so far.

Actually, I was thinking of including some old pictures in this post, of Penguin playing with Duplo when he was aged 1-2 years old. But looking through those old pictures still stirs up so many emotions, which take a lot of energy and time for me to process, so I’ve abandoned that idea for now. You see, there are plenty of photos there of our little boy looking intrigued by toys and playing with them in the ways most kids would, without any obvious difficulties. And he’s looking us in the eyes, interacting and sharing smiles, and eating ice cream, porridge and other sticky things (which he’d later go off completely). On his second Christmas, at 21 months old, he got a toy saxophone and almost instinctively knew how to use it, and the same went for the garage and cars he also got that year. He blew into the saxophone and pressed the keys, he drove the toy cars down the ramps and made engine sounds. These were skills of play, which he had for a short while, and then gradually lost again over the next year or so. A few years later, after his diagnosis of autism and at the beginning of us starting a kind of ”intensive training” to help him develop/regain these and other skills, our Penguin no longer knew how to blow into a toy instrument or to make bubbles, he wasn’t interested in driving toy cars, and he wouldn’t make engine sounds (or animal sounds, or any words/parts of words which he’d started using before he regressed).

You might think that he had found other, perhaps more ’neurodiverse’, ways of playing instead. But that was not the case. He hadn’t really developed any other strengths in place of this lost skills. He’s always had a very strong visual memory, and I never noticed any regression in that area, but as his ways of interacting and communicating with us became more limited, that ability too became more hidden.

Some of you who are reading this may think that we should be more accepting of our child’s differences and not try to ’force’ him to play with us just because that’s what ’normal’ kids do. Discussing that could be subject enough for a whole post in itself, so I’ll try to keep it very brief: I would like my child to develop basic skills which can enable him to manage as independent a life as possible when he gets older, and preferably not only manage but also enjoy that life. While learning to ’play’, he’s also working on many of those essential skills. And he enjoys learning and mastering new/regained abilities, but he needs our help and support to get there. And he also enjoys to play and interact, but when something is new to him and it isn’t clear to him what his role in the situation is, it becomes stressful and not enjoyable at all. So he’ll generally avoid doing things that are new to him, which means he misses out on the many opportunities of development which come naturally for most kids.

Penguin’s neurological differences, being autistic, mean that he processes sensory input (what he sees, hears, feels, tastes etc) differently to more ’neurotypical’ people. He can be difficult for him to sort out which of all the things that are going on around him that he should be focusing on. And sometimes it all becomes overwhelming. So to feel safe and comfortable, he will generally stick to the same things. Watch the same dvd’s, eat the same food, etc. He can certainly find joy in new things now and then, and he’s not as rigidly stuck in routines as some others are, but he needs to feel secure before trying new things and he needs support and a bit of a ’loving push’ (a term which Temple Grandin has made popular).

Well, this post was supposed to be about lego, right? Don’t worry, we’re getting there now!

So, when Penguin was 1-2 years old he’d play with Duplo, and while his playing skills gradually and slowly regressed, he did keep on building Duplo towers for a long time. Admittedly it’s a very basic form of play, just stacking pieces on top of each other, but it was an activity he had the ability to do and one which we could quite easily join him in, by building another tower and then joining them up, or by  handing him the next Duplo piece, and commenting on the height, colours, wobbliness etc.

Alas, with time, Penguin’s interest/abilities in Duplo-building also faded away, only making very sporadic appearances. And when his therapists (there were usually two of them at each session, and they’d show us examples of exercises we could then work on at home and at his preschool) brought in Duplo pieces and asked him to copy some very simple constructions (such as putting a blue piece on top of a red piece, and perhaps add one more on top of that), it was quite painful to see that he struggled with that, due to poor motor skills and hand-eye coordination. But he was great at matching the colours! So this provided us with a good way to work on copying, which is a form of interaction, and at the same time building better motor skills, hand strength, coordination etc. If you have a child with similar difficulties to our Penguin’s, you might like to try this too? We also used wooden building blocks in a similar way, as that removed the hand-strength aspect which restricted how long we could work with Duplo for before it became too frustrating.

Eventually I felt it could be worth attempting to move onto the normal sized lego bricks. I found a Lego Junior set which I thought looked good, versatile and not too complicated, and I bought it for Penguin as a Christmas gift. And as something to work on together, as a joint effort, it was a success! Some bits were really tricky and requiered quite a bit of help, and sometimes Penguin’s fine motor skills and strength wasn’t quite there yet. But it was a lot more fun building a car and a petrol station etc than the mostly quite abstract Duplo creations we had been limited to until then, so a big plus on the motivation side, not least for me! And to be honest, if the playmate/therapist/teacher person isn’t motivated and engaged in the activity, it’s hard to make it seem exciting and motivating to the learner.

We’ve gone on to building more cars, airplanes, helicopters, fire brigade sets, town houses, holiday houses, boats, space ships and more. We don’t really do pretend play though, so for us ’playing’ with lego is all in the building process. But I suspect that is probably what it’s like for most people, isn’t it..?

We’ve established a bit of a system, where my role is mainly to find the next few pieces needed while Penguin does the actual building (as seen in the pictures above). He’s really good at following the step by step instructions which all lego sets come with, but makes the occassional mistake, so I keep and eye and if I spot a mistake I ask if it doesn’t look a bit differently on the picture (while pointing at the detail I’m talking about). I try to avoid the word ”no” and not make a big deal out of mistakes. He’s usually fine with it, but IF he gets upset he may well take the whole thing apart in frustration, and using a kind of ’low-arousal approach’ helps avoiding that.

It’s also important that I take notice of Penguin’s signals showing me when he’s keen to take a break. It’s very easy to tell, as he’ll basically just get up and walk off. Sometimes that’ll be after just 5 minutes, sometimes 20 minutes or more. When he starts to wiggle on his chair and is about to get up, I usually encourage him to stay on for just a little bit longer, with a ”Let’s just do two more pages” or ”Let’s just finish putting the wheels on”, or whatever is relevant at that point, and he’ll generally be fine with that.

Apart from building sets, we still occassionally do the same kind of copying exercises as we used to do with Duplo or wooden blocks. It’s a quick and easy thing to do whenever you’ve got a few minutes. The only preparation needed is to find two of each of a few different pieces. 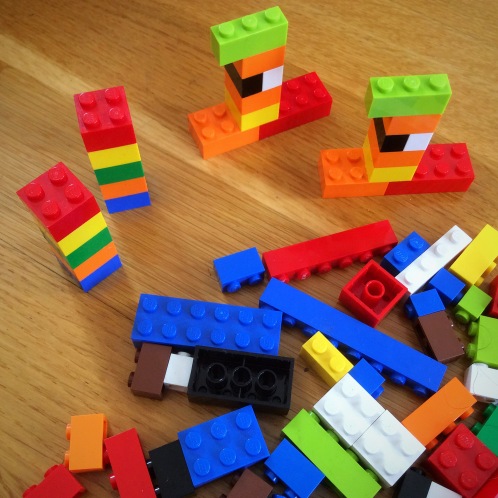 I loved building with lego when I was little and am really enjoying being able to do it together with Penguin now. The fact that you end up with a pretty cool looking product (which you can see on the box, so it’s clear from the start what you’re working towards) is a big plus motivation wise, and there are so many skills being worked on in the process:

…and if you’re doing it as a together activity, like us, then you can add cooperation, turn-taking and social interaction to that list!

I would also say that lego can be helpful in building confidence and a sense of achievement. And when you have a child with disabilities, their weaknesses often get focused on more than their abilities, so for both parent and child it is great to find positive ’CAN do’ things (rather than ’can’t do’), and lego building has very much been one of those for us.

In regards to numeracy (which is not one of Penguin’s strengths, yet anyway), we’ve also tried using lego pieces as a clear way of showing simple addition, such as different ways of adding up to a total sum of four:

However, while being hands-on and clear, this way of working on basic maths doesn’t seem to be very motivating for Penguin. I don’t think he finds it a meaningful activity. So numeracy is still something we mainly work where it appears more or less naturally as a part of other activities, not so much on it’s own. If you have any favourite ways of working on basic maths skills, which you think might work for us too, you are more than welcome to share in the comments! I’ve always got my eyes peeled for more ideas and inspiration.

Well, that’s all for this time folks, thank you for reading! I’m hoping that these posts on play (I’ve got a few more planned…) can be of some use to others with similar developmental differences to our Penguin, and perhaps help you find more ways of having an enjoyable time together, while working on some useful skills, too!

32 thoughts on “Penguin Plays… with Lego!”