Yesterday we made these little paper roll penguins, as a way of highlighting that it was World Penguin Day! There are 17 different species of penguin in the world (although some may say 16 or 18, as there are also several sub-species and other named variations, and some disagree on which ones that should qualify as actual species), and our DIY penguins here are mostly inspired by the Rockhopper penguins, with their yellow ‘hairdos’.

To make our penguins we used:

Firstly we wrapped the black felt around our paper roll (we made one each), and used glue to seal it in place. We then folded down the excess black felt into the center of the roll.

Next we drew an oval on the white felt, and cut it out. If you’re happy to cut freehand without first drawing the shape, then feel free to do so. For Penguin it definitely helped to draw first (although following the curved line when cutting was very tricky for him). I realised too late that colouring pen wasn’t a great choice, as it would bleed through the white felt so that you can see traces of it on the finished item. So I’d recommend using a crayon or pencil instead. Once the white ovals had been cut out, we glued them onto our penguins.

We added googly eyes and orange beaks cut out of card, and then made the fancy hairdos using yellow card which I cut into a shape as can be seen in the picture above. In hindsight I think I could perhaps have made them slightly smaller. Anyway, cutting into the yellow card to make it “hair-like” provided a lot of scissor skills practise, even bordering on too much, as I had to help out a fair bit to avoid Penguin losing his patience with it all. But he was very happy to squeeze loads of glue onto them (and squeezing is great for working on hand strength!) after all the cutting was done. We then rolled the yellow card up and stuck it into our penguins’ heads, and shaped their yellow strands to give them their final funky look! 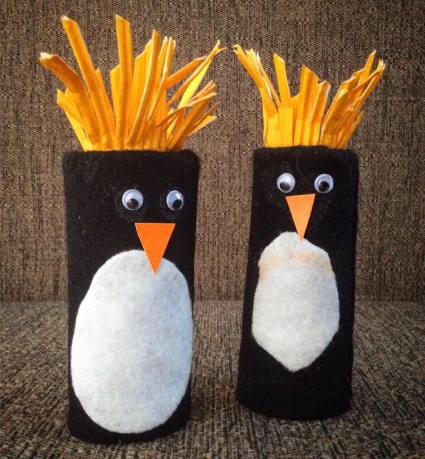 At this point, out Penguin was done, and I think these little Rockhoppers look pretty cute as they are. I’ll admit though that my original plan also involved adding wings (cut out of black felt and glued on) and feet (using orange card as for their beaks, although if you look at real life penguins, their feet are usually pink, grey or black). So feel free to add those features too, if you’re feeling ambitious!

For more art & crafts ideas from us, please take a look HERE. And to see more of what else we get up to, join us on social media!:

Below are a few products from amazon.co.uk relevant to this post (click on picture or text, links open in new window). Prices stated were accurate at the time of publishing but may of course change.

All links included in this post are Amazon Affiliate links, meaning that if you click through here and decide to make a purchase, I should recieve a small commission from Amazon (of no extra cost to you, of course!) as thanks for pointing you in their direction. Every little helps, thank you ❤